Keighley & Worth Valley Heritage Railway Station has both tourist visitors travelling on iconic steam trains along with commuters using regular services to other local towns. A key feature of the station is the clock, with a tradition of displaying the time of the next train not the current time. Smith of Derby recently worked alongside the station to ensure the time tradition would continue for many years to follow by creating a bespoke solution for time changes.

For many years the clock hands have been manually adjusted by a member of staff, using a step ladder to access the hands. However, it was decided that an easier and safer solution should be found and Smith of Derby were approached to develop a bespoke system for this.

A small opening in the clock’s pillar was identified as the perfect location for the equipment as it could be accessed on foot. This would be the location of a small adjuster knob, which would now operate the hands, meaning any necessary time changes would become much easier.

To ensure that the clock hands could be adjusted, bespoke dials works were developed to suit the two-sided clock, with the clock hands modified to be compatible with the dial works. A drive rod goes from the bevel gear set to the gear box where the adjuster knob is located. Finally, a clutch mechanism was installed to ensure the hands didn’t move following time setting. 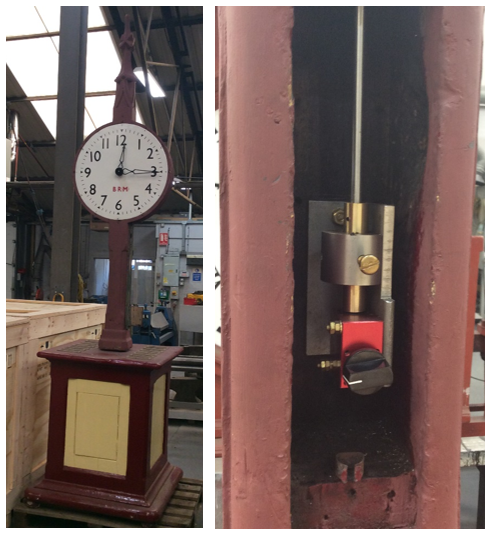 Left: the bespoke clokc in our Derby works. Right: The bespoke gearbox and adjuster knob used for time changes.

Following completion of the work, the clock will return to its West Yorkshire home so passengers using the station will know the time of the next train once again!