A bespoke clocktower is a feature of the Arkin Group’s new HQ in Girne, Northern Cyprus. Smith of Derby were commissioned to design, fabricate and install the four clock dials for the tower, along with installation of a bell sound system to strike the hours during the day with night silencing programmed for evenings.

Working alongside the Arkin Group, who own a host of companies in the leisure industry, Smith of Derby completed their first project in Northern Cyprus. The clocktower was to be both a feature of the state-of-the-art HQ and a focal point of the town of Girne, a town famous for Old Town and Harbour areas.

The four skeleton dials to adorn the clocktower were fabricated and finished in Derby, before being shipped to Cyprus ready for installation. The 2.9m dials were fabricated in two halves, to make transit easier, before the team completed assembly on site.

The dials were finished in a powder coated black paint, with 23½ Carat gold leaf for the three concentric rings. Finally, 050 opal acrylic was used for the glazing of the dials, ensuring that the LED lighting will have full effect of an evening.

One of the clock dials during the fabrication process in our Derby works.

Upon completion of the work in Derby, the clocks and bell sound system were shipped to Cyprus and two of our clockmakers travelled to the site to install the clocks. Clockmaker Tony Davies, who regularly completes international work, was accompanied by Apprentice Clockmaker Sam Schoonderwoerd as the project offered a great learning opportunity.

The clocks were successfully installed by the team, with the hands being powered by a heavy duty T300 movement which works in climates between -20° and 60° ensuring the hot weather doesn’t affect reliability. 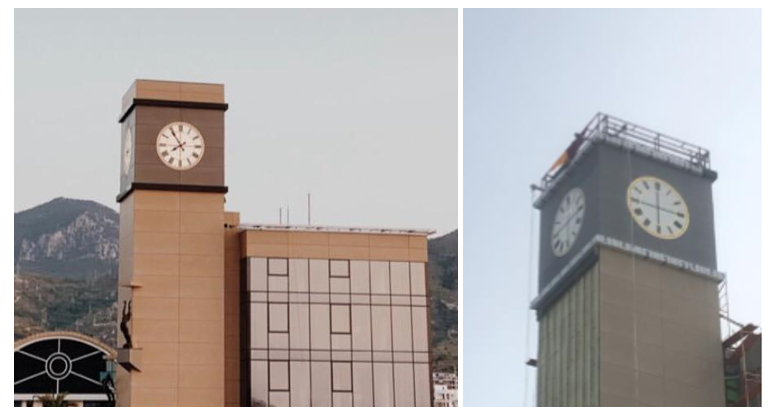 Jim Foster, Sales Director at Smith of Derby, was delighted with the finished work. “This has been an exciting project to be a part of. It is always fantastic to work alongside companies such as the Arkin Group, in areas of the world where there are no Smith of Derby clocks. I’m delighted with the outcome and hope the people of Girne feel the same about both their new timepiece and bell system”.