Restoration of Clock Dials at a Historic Lincolnshire Building

The market town of Brigg, North Lincolnshire, has a very famous building situated in the town centre called the Buttercross. At the top of the building is a turret which houses two clock dials and a weathervane both of which form a prominent part of Brigg’s town centre.

The historic building, which was built around 200 years ago, was the former home of the WH Smith until they left the town in the 1980’s and has now become tourist information for visitors. In the late Autumn, scaffold was erected around the prestigious building to carry out various repairs. It was decided whilst this was in place that the clock dials would be restored. 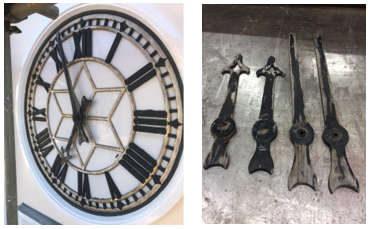 The dial and hands before the restoration project.

The first step was to remove the cast iron skeleton dials and return them to our Derby works where the glazing was removed ready for the dials to be shot blasted. Following this various paint layers were applied to make sure the dials were of the highest quality upon their return. Along with work on the dials, new replica mahogany hands were made as the existing ones were beyond repair. New Perspex glazing was also added to the two 4ft dials before the gold leaf finish was carefully applied to add detail to this prominent town centre clock turret.

The glazing being removed and one of the dial after the zinga primer paint layer was applied.

The dials were then returned to their North Lincolnshire home where they were fixed back onto the clock turret before the scaffolding was removed from the site, ready for the various events taking place in the area over the Christmas period. 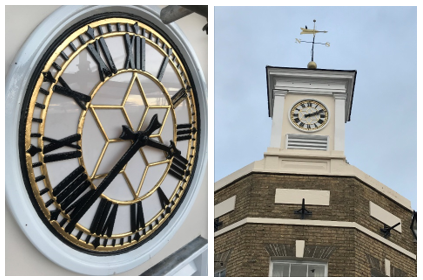 The dials following the restoration project.