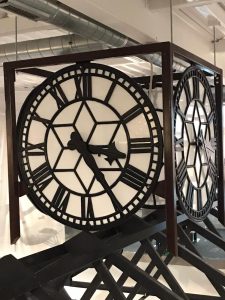 Smith of Derby are very proud to have recently completed the restoration and installation of the Mossband Clock for the wonderful Devil’s Porridge Museum in Dumfries and Galloway. A clock that we originally manufactured and installed 104 years ago and the only part left of Mossband House, the central headquarters of H.M. Factory Gretna and later used by the MOD. A real local landmark, it is a privilege to have been part of the process to save and rehome this historic clock, now a centrepiece in a new display at the Museum.

H.M. Factory Gretna was the largest munitions factory in the world during the First World War and The Devil’s Porridge Museum tells its story. 30,000 people, 12,000 of whom were women, helped the war effort by carrying out the dirty and highly dangerous work of producing the much needed ammunition for Britain’s troops who were suffering a shortage of firepower during the early years of the war. Sir Arthur Conan Doyle came up with the name ‘The Devil’s Porridge’ after visiting the factory and witnessing the women mixing highly volatile cordite paste to make propellent for shells.

The team at the Devil’s Porridge were also recently featured on ITV Border news, you can watch the report here – ITV News: the clock which guided thousands of munitions workers – YouTube – it explains a bit more about how the clock came to be restored after having disappeared for more than five years following the demolition of Mossband House. It was only when someone contacted the museum to say they had it stored in pieces in their garage that the project to return it to its former glory could get underway.

You can watch the unveiling of the clock and the display, which happened live on Facebook on Armistice Day 2020, via this link – https://www.facebook.com/devilsporridge/videos/1066440543803165/

For further information on The Devil’s Porridge Museum, please visit their website – https://www.devilsporridge.org.uk/