The Hourglass Clock at Burghley House

As the Burghley Horse Trials come to an end for another year, we look back to 2009 and our work at Burghley House, Lincolnshire, which is a major landmark at the prestigious equestrian event. We were asked to design, fabricate and install a feature clock for the house gardens, which would allude to the seafaring ancestry of the Burghley family, in whose gardens the timepiece is located.

The hourglass pedestal bears 12 icons which correspond with each passing hour. They correlate with specific stories relating to members of the family including Lord Burghley, English statesman and friend to Queen Elizabeth I. Through the glass spyhole in the pedestal, icons are revealed as they wax and wane. 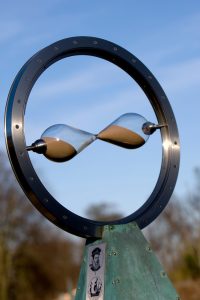 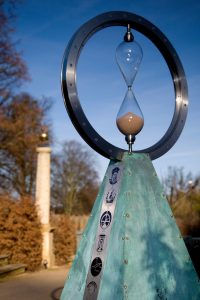 As with an old marine hourglass, the passing hour is described by the hourglass, the pouring sand and curious movement becoming at once engaging, delightful and distracting, and completing this puzzle in time. Making this both an accurate time telling clock and a piece of public art, through the visual concept of this timepiece.

The ring surrounding the hourglass comprises a stainless-steel casing and concealed bronze rack gear which is advanced by a rotating pinion. Copper panels for the base have been treated to accelerate the natural ageing or verdigris process, lending them a sense of history. Though the moving parts are not intended to show time to the exact minute, they do nevertheless keep accurate time overall thanks to the self-correcting power failure back-up system.