Six members of the Smith of Derby team embarked on a sleep out mission last Friday in aid of raising vital funds and publicity for the Padley Centre in Derby. All six members of the team completed the 12hour sleep out, despite the best efforts of the elements which was testing at times.

Following weeks of fundraising, the team prepared for a tough night ahead on Friday afternoon. With the weather forecast looking wet, waterproofs were packed and sleeping bag covers were purchased. Arriving at the event location, under the Derby Cathedral clock, fundraising was the first task as collection buckets were handed out to all of those taking part. As the night continued the team mingled with others taking part along with sharing stories and tales to pass the time. At 7am the next day the event finished, and the team headed home for a warm shower and some much-needed sleep! 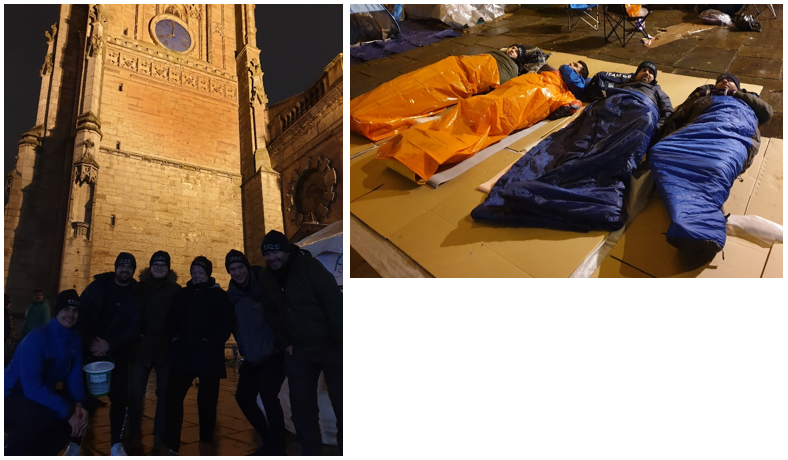 Dan Marshall, from the Smith of Derby finance team, was one of the six team members who took part and was proud to represent both Smith of Derby and the Padley Centre on Friday night. “This was the perfect opportunity to both raise money and awareness for this wonderful charity but also a to get to know the Smith of Derby team a little better as I’ve only recently joined.  The evening was enjoyable, although it was cold and wet, but offered perspective of what some people have to go through daily. Even though I missed the rugby the next morning because I fell asleep, I’d definitely consider doing it again!”

The Smith of Derby team have raised a fantastic £750 towards the Padley Centre so far, however there is still time to donate at: https://www.justgiving.com/fundraising/smithofderby1