As summer reaches its height and children across the UK prepare to finish school for another year, there is no slowing down for the Smith of Derby team as we continue our hard work to keep the worlds time ticking! The last few weeks has seen another new team member join our famous company and more international work commence.

We are delighted to confirm the start of our next apprentice! It seems strange to write the word ‘apprentice’ when introducing our latest new member of the team. Jason Budd is a highly qualified IRATA rope access trained construction professional. 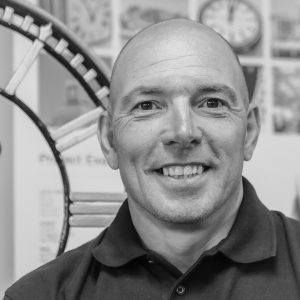 Jason has worked with our team for many years as a rope safety consultant. He has been a construction and health & safety professional for much of his career. Working in power industries where adherence to H&S is paramount.

So, in Jason’s situation, ‘apprentice clockmaker’ is very much about learning the ‘ropes’ in clock making. What better team can he join than Smith of Derby to springboard him and his skills into this new interest and new challenge.

Andy studied Electrical and Electronic Engineering at University before he started his working career designing the software and hardware for the first computer controlled large telephone exchanges, working with some prestigious clients including Shell and the BBC.  He then went on to work with early personal computers including the IBM PC when it was first released. Andy has spent most of his working life in corporate IT.

Along with this Andy has had a lifelong enthusiasm for turret clocks and curates his own turret clock collection and workshop. He has collected over 40 turret clocks from all over Europe and the UK and is probably the only collector of Swedish turret clocks in the UK along with researching turret clockmakers.

Andy has been working with Smith of Derby for many months now, helping us improve our performance in the traditional clock marketplace. His knowledge of clock restoration, repair and conservation is invaluable as we invest to sustain our leading role in protecting the country’s horological legacy for generations to come.

Following on from our work on the Caledonian Tower, see below, Andy has recently completed making and installing a demonstration clock escapement for the tower. This is to show visitors how the pinwheel escapement on the Moore turret clock works.

Left to right: Caledonian Clock Tower, the model developed by Andy Burdon and the mechnaical clock inside the tower.

The Caledonian Tower formed part of the original Metropolitan Cattle Market which was opened in 1855. The cattle market became one of the sights of London with sales of more than four million animals annually. In the late 1800’s the trade in livestock declined and the area became more of a flea market.

The 45m tower is brick built and clad in Portland Stone. The clock was made by John Moore and sons of Clerkenwell in 1856 (actually the year another budding young clockmaker hit the scene!) and is, as far as is known, one of only 2 this large made by Moore. In fact, this clock is one of the 4 contenders which were submitted for the Great Clock of Westminster project (Big Ben), the others being John Whitehurst, Vuliamy and Frederick Dent who, of course, won the contract.

The latest work done was to clean the mechanism, restore the dials and bring the clock back into full working condition. We also installed night silencing to both the strike and chime trains.

Islington Council now run twice weekly pre-booked tours taking the public up the tower to see the clock, bells and the view over London.

It doesn’t seem that long ago that we were introducing Tom Ratcliffe to the company, so it’s fantastic to receive comments such as this from one of Tom’s customers. Phil Slack, Churchwarden at Doveridge.

“I would just like to send our thanks for the work undertaken by Tom Ratcliffe at St Cuthbert’s Church today.

Tom did a thorough overhaul of the clock striking mechanism, although he had only arrived to carry out the routine maintenance, after I mentioned to him that we had had a complaint from a parishioner via the diocese about the clock striking the wrong hour which has been a problem for many years now.

After Tom’s hard work we trust the problem is fixed. Once again Tom thank you for your time spent with us today”

“I am writing to say thank you for completing the works on the Crayford clock tower well ahead of schedule and at a very good standard. The people that worked on it were excellent and the tower looks great. Please pass my thanks to the clockmakers that repaired the clock mechanism. All the best. Ivan”

Smith of Derby Around the World…

In our last edition of NewsTime we started tracking the Smith of Derby cap around the world. Since then we have received more entries as to the cap’s whereabouts.