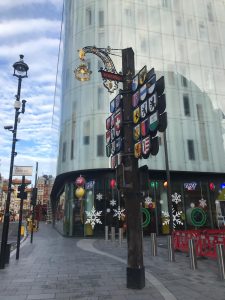 We recently completed a refurbishment of the Wappenbaum Canton Tree, one of two monuments in Swiss Court, located between Leicester Square and Piccadilly Circus in London. The other being the Swiss Glockenspiel clock which we restored & reengineered as a free standing structure in 2011 and maintain to this day – so we know the area well. 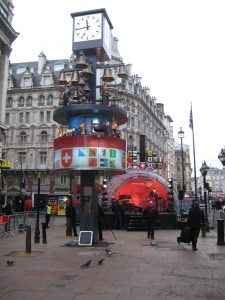 The Swiss Glockenspiel that we restored in 2011

The Wappenbaum has been a bit of a different project for our team to work on, one without a clock!

Our engineers attended the site and removed, from the tree, the intricately detailed decorative components comprising of a gilded crown, scroll work, hanging grapes & eagle, the bracket and ‘Krone’ signage panel. They were then brought back to our Derby works for a complete overhaul as the paintwork and gold leaf on all elements was faded and tarnished. Our team used their skills to bring them back to their original glory by chemically stripping each part back to the bare metal and powder coating, before paint was applied to the ‘Krone’ signage panel and bracket. The decorative elements were coated with size and gilded by hand in gold leaf, a very labour-intensive process due to their intricate detail. 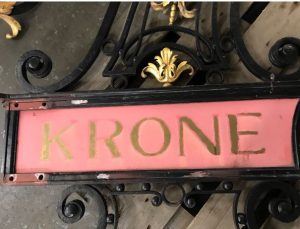 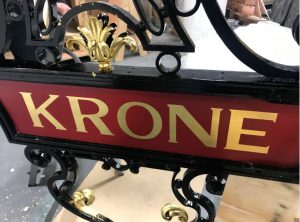 A before and after of the ‘Krone’ signage panel.

The newly restored parts were then returned to The Wappenbaum, where our engineers reinstalled them. Alongside this, the base of the tree was rubbed down & repainted, the 26 shields showing the coats of arms of the 26 cantons of Switzerland were thoroughly cleaned and all fixings were checked and replaced if needed.

Most people are unaware of what this striking monument, in amongst this popular tourist area of London, represents. It was presented to the UK as a gift from Switzerland to mark Queen Elizabeth II’s Silver Jubilee in May 1977 and as a token of friendship between the two countries. Just a couple of metres away from The Wappenbaum, is the Glockenspiel clock, with its 27 bells and 11 moving figures, which we control remotely from Derby. The clock, originally attached to the front of the Swiss Centre (which was demolished in 2008) was gifted to the City of Westminster by Switzerland & Liechtenstein in 1985. We were very proud to restore and update it as a 10-metre-tall freestanding piece before its return to Swiss Court in 2011. Together with the The Wappenbaum, these two important monuments to friendship make a colourful display and it is a pleasure for us to be involved in keeping them at their best.

We have really enjoyed bringing The Wappenbaum back to life, it now gleams brightly! 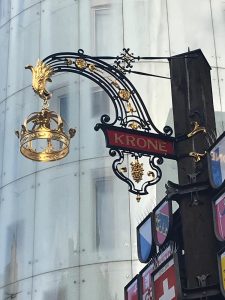 A close up of the ‘Krone’ signage panel, the gold leaf shining!