Dials restored at one of Edinburgh’s landmarks

Clocks are at the heart of Edinburgh. The famous Balmoral Hotel is one of the City’s many tourist attractions, along with the timeball which marks one o’clock daily. Another clock which many visitors see is located on George Street and adorns the clocktower of St Andrew & St George’s Church. Following many years of operation, it was decided that the clocks should be restored back to their original glory.

The three 5ft cast skeleton dials stand proudly above the bustling streets below where many shoppers, tourists and commuters are located. Our team removed the clock hands and then started to chip out the original glazing which had become unsafe. Once that stage was finished the restoration process could began.

The skeleton dials were abraded back to their base so a full paint restoration process could take place. A zinga primer undercoat was applied to the three dials and the three pairs of hands before they were painted black gloss, as per their original specification. The paint layers ensure that the clock restoration is of the highest of quality, meaning that it won’t be required again for many years to follow.

Left to Right: The skeleton frames following the chipping out, zinga primer beign applied and the black gloss finish.

The team working on the project then moved onto the glazing of the dials. As per many projects now, the glass was replaced by 050 opal acrylic. The team cut the acrylic sections using specialist equipment before inserting them into the various openings. 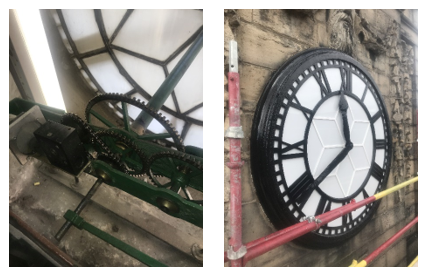 Whilst the clock hands are removed it presents a perfect opportunity to strip and clean the dialworks so this was also completed as part of the project. Following this the hands were reinstalled, and the clock was commissioned back to its full working order.