Dial Restoration in The City of London

“They’ve done a cracking job in the workshop. They’ve cut out all the rot, all the old bad metal, restored them fully, and obviously the crowning glory on the dials is the gild.” 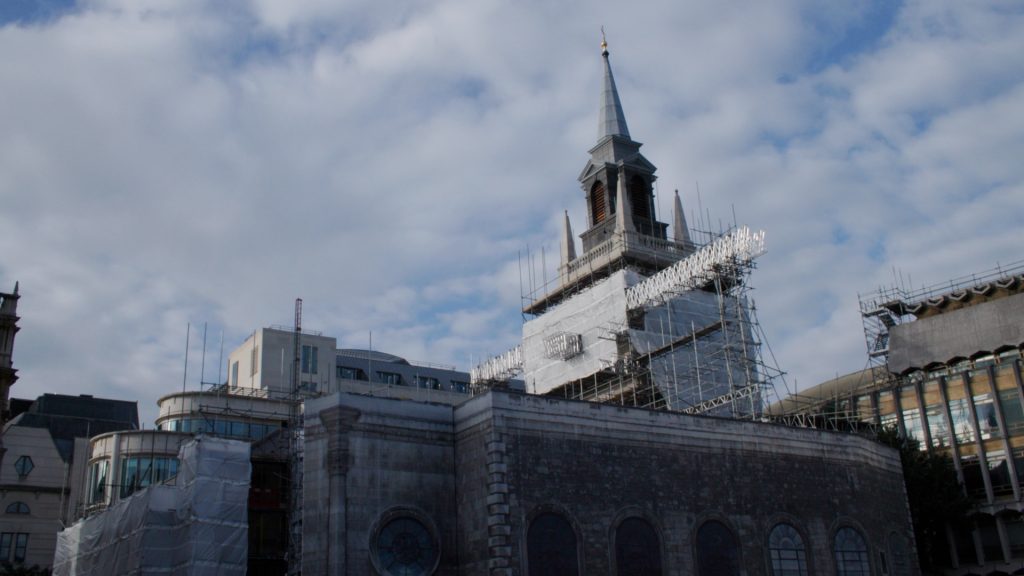 The four dials on the St Lawrence Jewry clock tower in the City of London have been faithfully restored and gilded with gold leaf, and painted black – the originally colour, discovered during the restoration process.

A four man team of Rich, Tim, Dan and Mak travelled from the Clockworks in Derby to London with the dials. Under the guidance of project managers from Bakers of Danbury and with the assistance of the scaffolding team from Fourways, they were successful in refitting the dials to the clock tower which overlooks the Guildhall square and can be seen from much of the City. 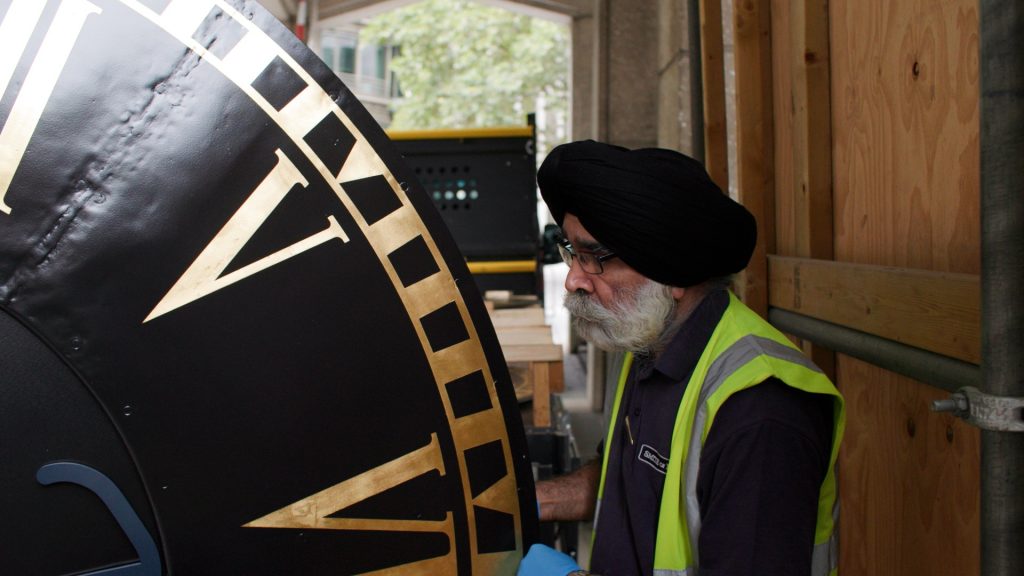 Mak and the other team members unload the dials and prepare them for being transported via the scaffolding lift to the top of the building.

There has been a church on the present site since the twelfth century. The first church is thought to have been built in 1136, and was destroyed in the Great Fire of London. The church was one of many re-built by Sir Christopher Wren. Work began in 1670 and was completed in 1677. It was one of Wren’s most expensive City Churches.

The name Jewry is a geographical descriptor. Before the great fire of 1666 there were many churches in the City (about 150+) and some had the same saint’s name. To distinguish them another title was attached. This is why so many of the City churches have interesting and odd names. The church is located close to a street called Old Jewry. This is where a Jewish community lived from 1066 to 1290. They came to the country with William the Conqueror and were expelled by Edward I. Hence St Lawrence Jewry.

The four dials in a poor condition, after removal from the church tower. As part of the restoration process it was discerned that while they are here painted blue, their original colour was in fact black and they have been restored as such. 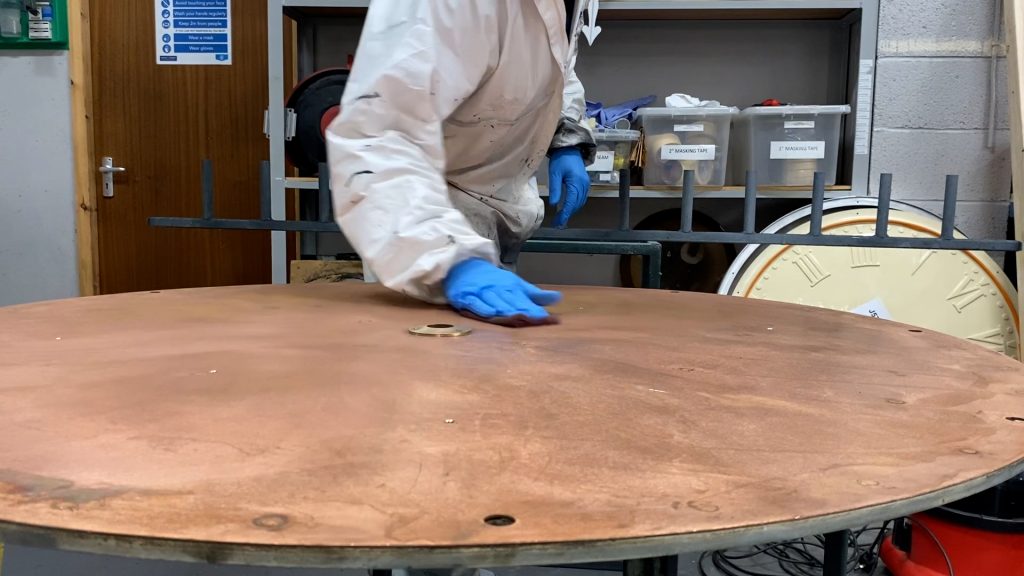 Spencer in the Derby Clockworks sands back the copper sheet.

St Lawrence was ordained a deacon of Rome in 257 AD was placed in charge of the administration of Church goods and care for the poor. In the persecutions under Valerian in 258 A.D., numerous Christian priests and deacons were put to death. The Prefect of Rome, a greedy man, thought the Church had a great fortune hidden away. So he ordered Lawrence to bring the Church in Rome’s treasure to him. The Saint went through the city and gathered together all the poor and sick people supported by the Church, or in some versions of the story all the children. When he showed them to the Prefect, he said: “This is the Church’s treasure!” 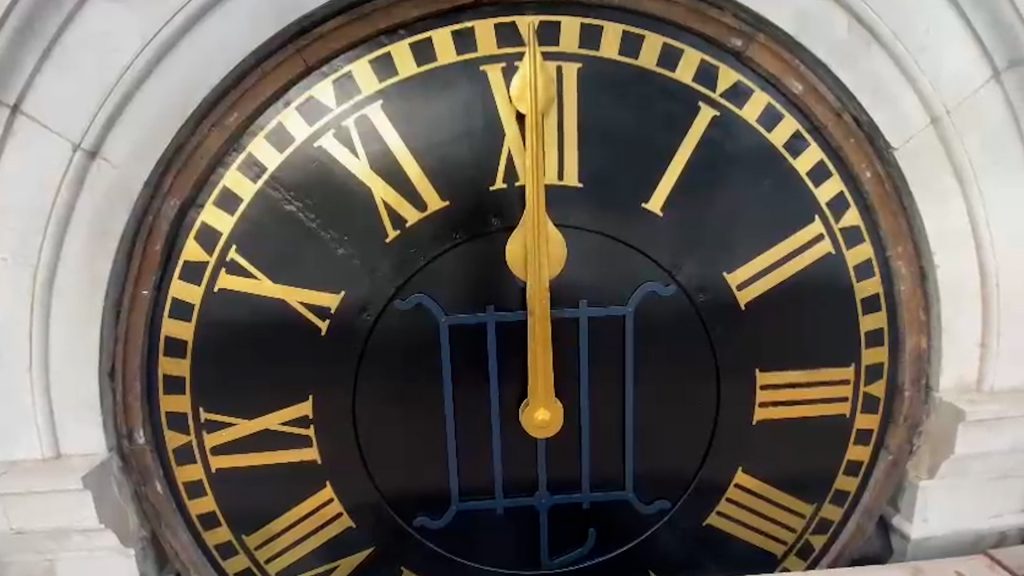 The gridiron adorning each dial, painted in blue is symbolic of the martyrdom of St Lawrence.

In great anger, the Prefect condemned Lawrence to a slow, cruel death. The Saint was tied on top of an iron grill over a slow fire that roasted his flesh little by little, but Lawrence had so much love of God that it is said he almost did not feel the flames. In fact, God gave him so much strength and joy that he even joked. “Turn me over,” he said to the judge. “I’m done on this side!” And just before he died, he said, “It’s cooked enough now.” 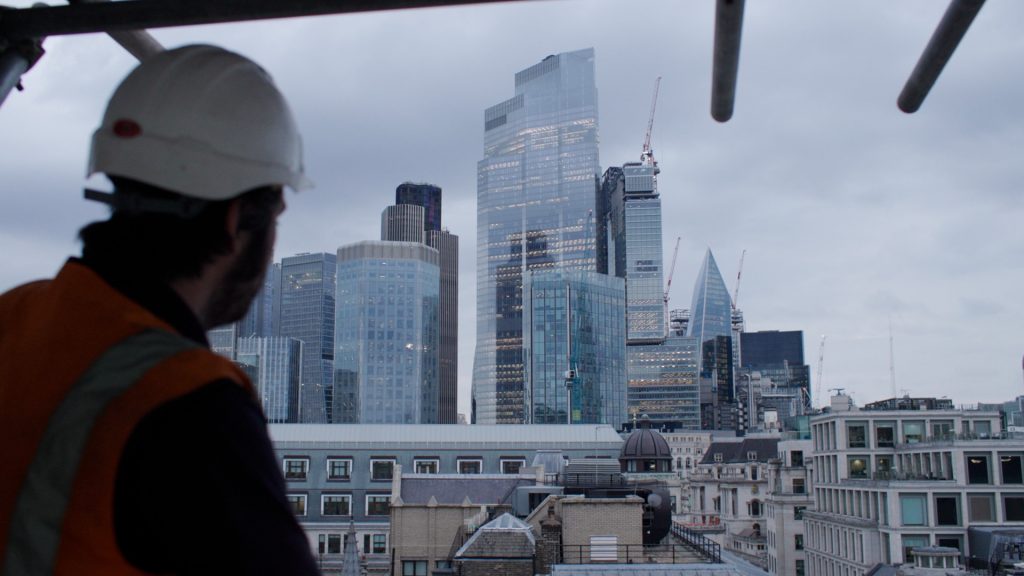 Richard, who worked in the team to refit the dials, describes how, “the dials were in a poor state of repair when we removed them. There were a lot of rotten sections in the lower portions of the dial. The copper sheet was coming away from the iron frame, where it had all delaminated. they’ve done a cracking job in the workshop. They’ve cut out all the rot, all the old bad metal, restored them fully, and obviously the crowning glory on the dials is the gild.”

Working in close collaboration with architects Julian Harrap, project managers Bakers of Danbury, and the scaffolding team at Fourways, the Smith of Derby team – both on site for removal and reinstallation, and at the Clockworks for restoration and finishing – have shown the diligence and care that can be offered when working to restore dials on a historic and culturally significant building.