We were recently approached to restore the Cotswold Hall’s projecting clock, a timepiece which is a real focal point of the community. The clock, which overlooks the towns West End, was originally installed in 1897 to celebrate Queen Victoria’s Diamond Jubilee and has a distinctive crown on top of it

The clock became abeyant following extremely heavy snowfall in the winter months, which led to further works to being discussed including a dial restoration as the timepiece was in poor condition. This is seen as a significant part of a vital community building which is used by many local groups and clubs, as well as a rural cinema. The original clock mechanism is also proudly displayed within the Hall.

We returned the timepiece back to our Derby premises, where we built a new drum along with restoring the existing dials and drive train. Following this, our clockmakers returned the dial to its home and reinstated it at the top of the Costwold Hall, overlooking the towns West End once again. 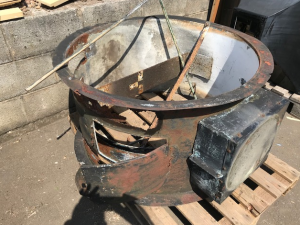 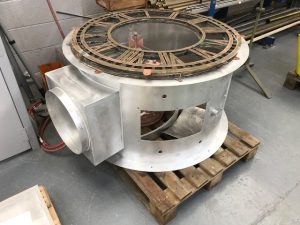 The new clock drum, following fabrication in our Derby works.

Following the works, trustee Jacques Astic had some very kind words to say about our work – “A big thank you to you all for the fantastic for job you did to our clock. It will now long outlast us all, even the young me. Everybody in Northleach is delighted to see it back looking better than ever.”

We would like to say thank you to the community for approaching Smith of Derby to complete these works, something which we are very proud to have been involved within.