Apprentice Clockmakers work with the Museum of Making

Apprentices at Smith of Derby have been busy restoring Derby’s historic Harrison clock for installation in the new Museum of Making when it re-opens to the public in 2020.

First installed at Derby Guildhall in 1842, the Harrison turret clock dates back to the same period. Its movement was designed by clockmaker, James Harrison of Hull (1792-1875), the great-grandnephew of John (Longitude) Harrison (1693-1776) who famously invented the marine chronometer to calculate longitude at sea.

Derby’s Harrison clock was retired from the Guildhall in 1976 and moved to the former Industrial Museum as a non-working exhibit where it later went into storage. Its fortunes have recently changed with the current development of Derby Museums’ new Museum of Making at the Silk Mill, and the clock is now undergoing conservation and restoration with local clockmakers, Smith of Derby.

The clock is an unusual example of its type as a hybrid, with all the hallmarks of James Harrison, but featuring 19th century workings from Smith of Derby – and a Smith of Derby nameplate. 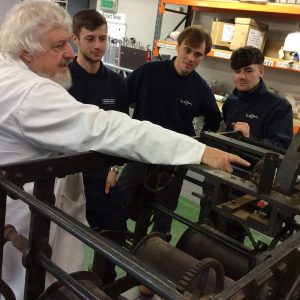 “This beautiful clock, previously maintained by Smith of Derby while in the Guildhall all those years ago, will now sit proudly on the ground floor of the new Museum of Making, working for the first time in over 40 years. This project will not only restore the clock to the city but will also provide opportunities for local makers to exchange knowledge and share skills along the way.”

Carried out by a dedicated team of apprentices, working alongside turret clock and Harrison specialist Chris McKay, the project is inspiring and training a new generation of clockmakers in restoration and conservation. Chris commented:

“Conservation efforts are starting to come in for turret clock work and I am pleased that Smith of Derby is recognising this and investing in young people. It has been very encouraging to see our apprentices developing a love for this old mechanism. We look forward to getting the clock back into the Museum and seeing it ticking again.”

The enormous clock first had to be carefully removed from the Silk Mill before being transferred to Smith of Derby where it has been painstakingly dismantled, cleaned, tested and re-assembled over the last year. The team were particularly rewarded to uncover the clock’s original James Harrison blue; a colour retained by some of Harrison’s other clocks and best described as a dusty RAF blue. 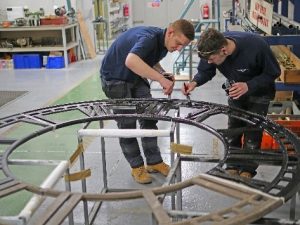 “The apprentices have been given a lead role in this project and it’s been great for us to work together and learn from each other to build our experience and knowledge on the job. It’s really rewarding to know that we’ve got the clock to where it is now and we’re all looking forward to seeing it returned to the Museum. To say that we’ve done that to family and friends – I think they’ll be quite impressed.”

Restoration work on the Harrison clock is near completion and the clock is expected to return to the Museum of Making in working condition once the interior fit-out of the building has been completed next year.

Interested in apprenticeship opportunities at Smith of Derby? For more details email jane.betts@smithofderby.com.