A Passion for Time – The Role of a CAD Design Engineer

As we continue our ‘A Passion for Time’ series, which looks into the different roles our talented team play here at Smith of Derby, we caught up with Oliver Beetlestone, our Senior CAD Design Engineer.

Oliver graduated from the University of Derby in 2019 with a First-Class BA (Hons) in Product Design and during the last year he has enhanced his knowledge by completing 2 levels of SolidWorks Certification – Certified SolidWorks Associate (CSWA) and Certified SolidWorks Professional (CSWP). SolidWorks is computer-aided design (CAD) and engineering solid modelling software which enables the user to draw in 2D or 3D. 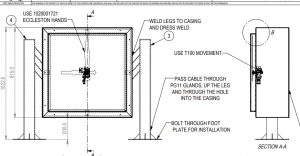 A drawing from Oliver’s first project – a clock for the entrance to Deal Pier in Kent.

Oliver joined Smith of Derby with experience of designing parts to help with vibration control for heavy engineering industries such as railway, military defence, marine, off highway and aerospace. At Smith of Derby, Oliver is part of a team designing and manufacturing time features which adorn luxury hotels to clocks that sit proudly within towns and cities to be enjoyed by the community for centuries to come.

From a young age Oliver was interested in design – he chose his degree in Product Design as he knew it would lead to a career doing something that he would always enjoy.  As well as rock climbing, Oliver spends a lot of his free time designing side projects or playing with 3D printers, so he knows he made the right choice.

It was through the University of Derby’s career service that Oliver initially saw the advert for his original role, Design Engineer. Now that Oliver has worked for the company for over eighteen months, he can confidently say that no two days are the same, there is lots of variation. One aspect that is constant though is the importance to have a head for problem solving, on multiple designs at the same time, and as Oliver’s workload includes some very complex projects, he can safely say his days are exciting too. The design process is one that requires much consideration, and once the initial concept is signed off by the client, the real work begins for Oliver as each component must be designed to a high level of detail considering the impact it has on the manufacturing process.

Many of the projects Oliver is involved in are within the luxury hotel and private client market within the Middle East.  Oliver joined our International Sales Director on a business trip to Dubai and Doha in 2019. This visit is another highlight that Oliver recounts, not only because it was the first time he had been to the Middle East but it was also invaluable to be able to immerse himself in the culture and meet the architects, design teams and hoteliers we work with.

As well as international visits, Oliver is joining the clockmakers on UK installation work, assisting with the assembly and disassembly of projects. This hands-on experience means Oliver can put his designs into context, learning what works well and what doesn’t, to inform future projects. One project that Oliver picks out as a personal favourite is the first clock he designed at Smith of Derby, it was a single sided, Art Deco in style clock which is installed at the entrance to Deal Pier in Kent. Oliver is looking forward to seeing the current projects he is working on come to life, both in the UK and overseas. 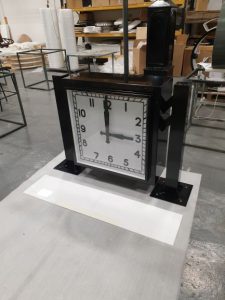 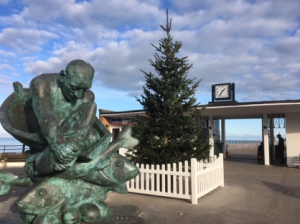 The Deal Pier clock during manufacture and in situ.