The ‘Woodfield Project’ in Tooting, London is focused on re developing an existing recreation ground back to former glory. Part of the project is a small turret, which now features both a clock and wind vane made by Smith of Derby.

The pavilion and recreation ground, originally opened in 1933, were created to offer a sports ground and changing facilities for young people in the area.  After many years of use it was taken over by a local school to meet their need for a sporting facility, however in recent years the school have moved on and the Tooting site has been out of use. Several years ago, a public fundraising campaign was started to fund the restoration of the facility, with the project now commencing to bring the recreation ground and pavilion back to public use.

When installing the clock dials our clockmaker noticed the wind vane and mentioned that Smith of Derby also specialise in this field. As the client was delighted with the clock, they happily instructed us to bring the wand vane back to Derby so it could be restored. Fabricator Ian Inglis, who worked on the project, used as much of the original wind vane as possible. He did re make the octagonal balls out of copper, the four cardinals and soft solder repaired the zinc joins. Ian said he was “delighted with the outcome on a challenging and time-consuming project” (over 60 hours was spent on this). Following this the wind vane was passed over to the finishing team who applying the paint in our specialist spray booth before it was returned to its London home.

Left to right: The origional wind vane, Ian working on the project and the wind vane following Ian’s work.

James Armishaw, the project manager for Smith of Derby said “its great to be involved in a prestigious heritage like this which will make a difference to a local community in London. Along with this its great that public time is being restored and is a prominent part of the community project.” 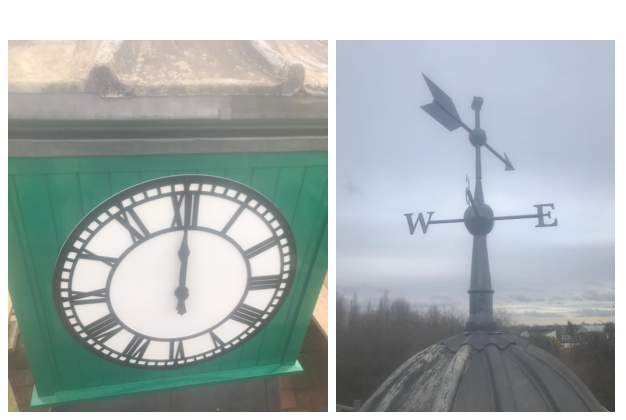 The clock dials and wind vane at the London site following installation.