Clockmaker Paul Kilburn annually attends the Trooping the Colour celebrations at Horse Guards Parade in London to ensure the clock chimes 11 o’clock as the Queen enters in her glass carriage.

On the day of the event, this year was Saturday the 8th of June, Paul arrives bright and early at horse Guards parade. However, he doesn’t wear his usual Smith of Derby attire but a suit, including a bespoke Smith of Derby waistcoat. Paul makes his way up to the clock room, which happens to be situated directly above the Royal Family’s seating area, ready for his duties. 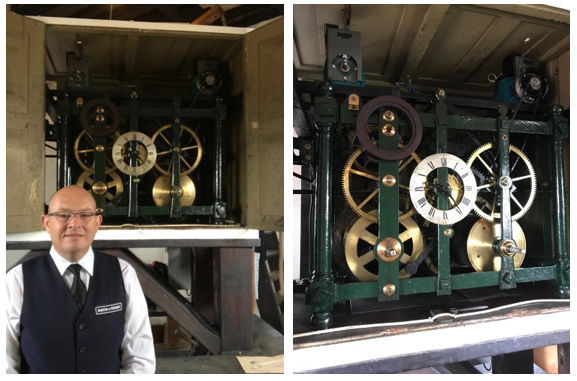 Paul and the clock at Horseguards Parade, London.

Paul’s main role is to ensure the clock strikes 11 o’clock as the Queen enters in her glass carriage, this use to happen as she stepped out of the carriage. To make sure the clock chimes at the correct time Paul receives a signal from the team ensuring a perfect ceremony.

Following this Paul de-commissions the chime, so it doesn’t strike at any other time during the celebration, and then re-commissions the clock once everything is finished leaving the timepiece is reliable working order.