Remembrance Sunday and Armistice Day are set to be very different this year. People are being encouraged to mark the days appropriately in their own way.

A great example of this is the memorial clock, looked after by our clockmakers, in the centre of Pelsall in Walsall which has been decorated for Remembrance Day every year since 2015 in a different theme. In its inaugural year, 15,000 red knitted poppies made by volunteers were put on the clock and nearby benches creating a striking display. This year the theme is the Battle of Britain and three Spitfires, crafted locally, look stunning surrounding the clock. It is a visual way of keeping Remembrance at the forefront of people’s minds. 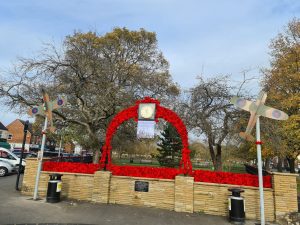 Our clockmakers have also been busy this week at The Devil’s Porridge Museum in Dumfries and Galloway.

The museum commemorates the mammoth efforts of the workers at H. M. Factory Gretna which was the largest munitions factory in the world during the First World War. 30,000 people, 12,000 of whom were women, helped the war effort by carrying out the dirty and highly dangerous work of producing the much needed ammunition for Britain’s troops who were suffering a shortage of firepower during the early years of the war.

Sir Arthur Conan Doyle came up with the name ‘The Devil’s Porridge’ after visiting the factory and witnessing the women mixing highly volatile cordite paste to make propellent for shells.

What a privilege it is for us to restore and refit a clock that we originally manufactured during the WW1 era in a fantastic museum dedicated to the lesser known heroes and heroines of war.

This year it is more important than ever to support The Poppy Appeal because like a lot of things, it is being affected by the Covid-19 pandemic. As well as wearing a poppy, support can be shown by using a digital poppy on social media feeds, or by downloading & printing a Remembrance Poppy poster from The Royal British Legion website https://www.britishlegion.org.uk/get-involved/ways-to-give/donate