Situated between the villages of Pencaitland and East Saltoun lay the historic Saltoun Hall, a 12th century tower and castle, two traditional clock dials along with a sun dial and an astrological dial.  The dials, which are located on the turret at the hall, were in abeyance for several years before James Ritchie Clockmakers restored them and brought them back to working order. 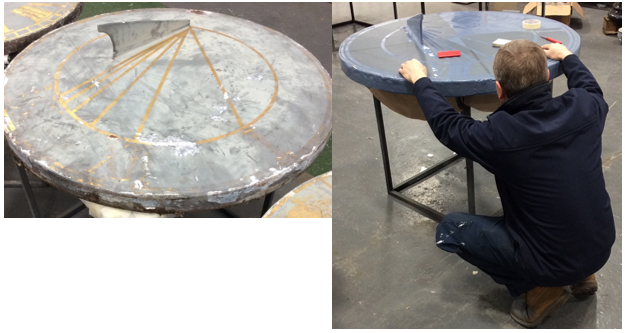 Following the removal of the four dials from the East Lothian location, they were transported to the Smith of Derby Group’s base in the midlands for the process to begin. The first step was to strip back the dials using a shot blast process which would bring them to a clean, adherent metal surface. The next step was to add an undercoat paint, so the finish would be of the highest quality once they go back to the Scottish site. Step three, angularly the most crucial, required the team to mark out the dials. Completing this process for the sundial was especially difficult as all the angles needed to be precise for this to have its desired effect. 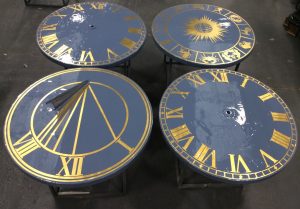 The four dials following the restoration.

Finally, the dials went through the gold leafing process. The base layer was applied and then, using 23½ carat double thickness English gold leaf, the finish was put on to the dial’s so they were looking ‘as good as new’. Following this the dials were transported back to the Scottish site and re-installed, along with an auto restart unit should power be lost and four Smith of Derby T200 motors.