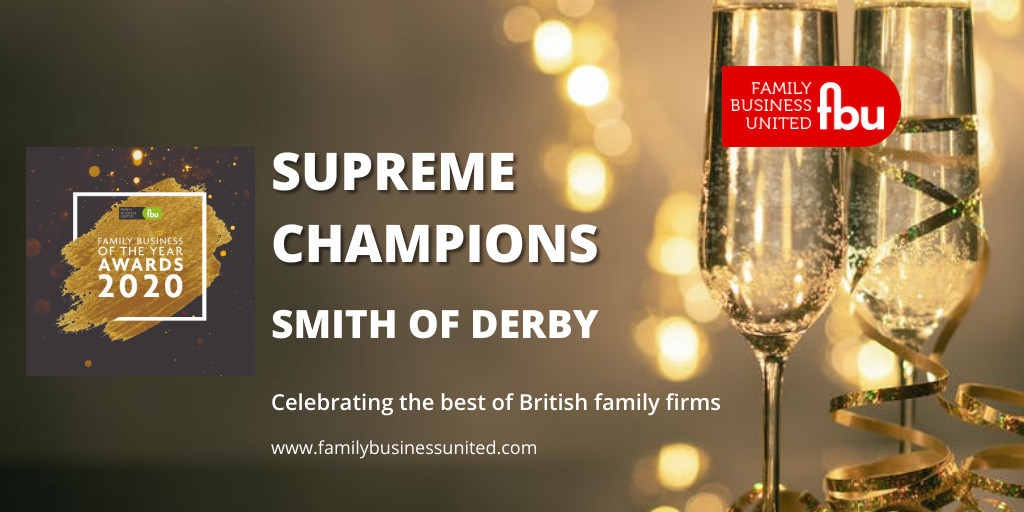 Family Business United celebrate family owned businesses across the UK. Recognising the contribution these businesses make to the economy as well as the thousands of jobs they support.

The FBU Annual Awards, usually held in London, have become a popular event for all family businesses across the UK.

In the ‘virtual’ awards ceremony held live across the internet, Smith of Derby were awarded Manufacturer of the Year, Regional Winners for the Midlands, and the coveted award of Supreme Champion, Family Business of the Year 2020.

In family ownership since our beginnings in 1856, and now under the leadership of the 5th and 6th generation of the family, the evening was filled with emotion.

A short film ‘Who We Are’, made by one of the 6th generation, can be found here.

The video celebrates the life and times of Smith of Derby and is a fitting tribute to its past leader for many decades, ‘Mr Nick’. Nick passed away just over two years ago, having served the family company since childhood, and the awards are a fitting recognition of all of his hard work in bringing the company safely into the twenty first century.

In July, clockmaker Jon Lee celebrates 50 years of continuous service with the company, from school leaver to now. In addition to keeping hundreds of public clocks to time, he helps to coach an enthusiastic and growing band of talented young clockmakers as part of our award-winning apprentice programme.

Left to Right: ‘Mr Nick’ and members of the 5th and 6th generation of Smith family, along with Smith of Derby chairman Jeremy Bowler.

Alongside many incredible family businesses, Smith of Derby is pleased to congratulate all the worthy winners and runners-up.

On winning this treble, Heather Whitworth, Mr Nick’s daughter, and a Director of the company, said:

“This is such a special moment for the company. It is a fitting tribute to the whole team who have worked incredibly hard not just in 2020 but over decades.

The team have worked tirelessly to maintain and develop the company, and to continue to cherish our customers and win new friends across the world.

These awards are accepted on behalf of the whole team who deserve all the recognition and our thanks.”