Nick Smith: A life in time 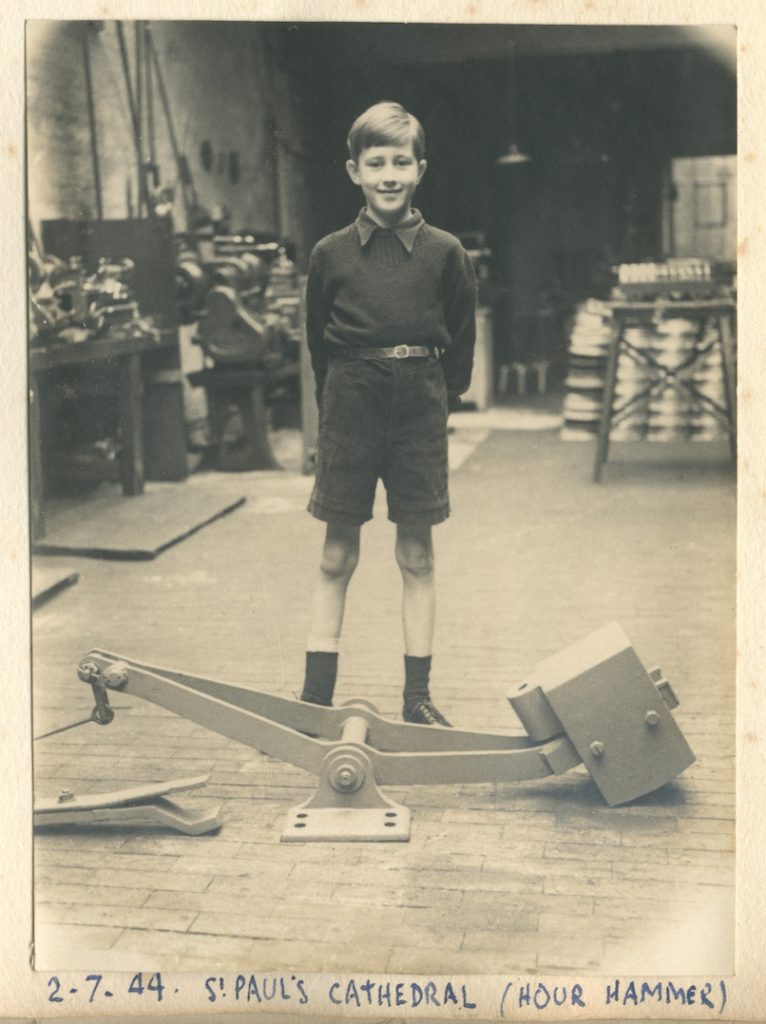 Nicholas Smith photographed in the Derby works, Queen Street on 02 July 1944 with the hour hammer from the St Pauls Cathedral Clock, London.

Nick Smith gave almost his entire professional life to supporting the turret clock making company founded by his great great grandfather, John Smith. In his school years he had regularly joined his father Howard when inspecting turret clocks in churches and public buildings around the country, or down at John Smith and Sons’ Queen Street clock works. This pattern was repeated with his own children many years later.

After training as an accountant, and graduating as the top student in the region, Nick travelled to Canada to gain international business experience. However upon the death of his uncle Alan in 1961 he returned to help his father at the clock works in Derby. He was closely involved in the running of Smith of Derby from that point, and took on the role of managing director on Howard’s retirement in March 1975.

In 1981, like Howard and his uncle Alan before him, he was made a Freeman, and the following year a Liveryman, of the Worshipful Company of Clockmakers and subsequently joined its Court. In 1994 he was elected Master. During this time he paid particular attention to apprentice training and the development of professional certification within the industry. He was also keen to ensure that Smith of Derby played an appropriately positive and supportive role in the British Horological Institute, being the largest public clock company in the country by some margin. Through the course of the 1980s Nick Smith worked with others to ensure the survival of another historically significant East Midlands manufacturer with a close link to turret clock making, the bell founders Taylors of Loughborough.

Commercially Nick understood the vital importance of: marketing, investment in R&D and technology, and the development and support of young talent across the business. However, having seen five periods of major economic downturn he also understood that there were moments when very painful decisions were required in order to keep the company secure.

While respecting the traditional side of the company’s work Nick was not satisfied to see it restrict itself to the maintenance and conservation of existing turret clocks. He worked hard to win export and other new business, and won notable contracts for new installations of landmark clocks all over the world. In parallel Nick invested time and resources in product innovations that could better serve the estate of several thousand ‘traditional’ customers across the British Isles. One important example addressed problems of time-keeping loss or gain accumulation. Accuracy would previously have been addressed regularly by the clock winder, but they became more difficult to find through the latter decades of the twentieth century, and Auto Wind units had increasingly been introduced to keep clocks working. Nick worked with colleagues to devise a solution: this took the form of a very small adjustable weight mounted on the pendulum with electronic controls which could be triggered by the first blow of the hour striking. The weight then rose to speed up the clock (if slow) or fell. Later, a global positioning system (GPS) sensor was fitted to allow for complete accuracy.

A further development championed under Nick’s leadership was a device that would hold the pendulum for precisely one or eleven hours and then release it accurately. Thus the problem of GMT/BST clock changes was solved without any of the damage to the pendulum spring that could arise from these situations, and reduced the challenges associated with difficult-to-access clocks. These are just two examples amongst many of how Nick constantly surveyed the engineering landscape for new materials, tools and techniques that might help Smith of Derby better serve horology and the customer. He was also determined that the modest scale of the company should not limit its ambitions: Smith of Derby was one of the first traditional engineering companies of its size in the country to purchase a computer. This fact was made evident when it became clear there was no trainer available for the foreseeable future, and Nick proceeded to teach himself how to make good use of it.

Nick Smith retired as Managing Director in 2001, but remained a key member of the board, and mentored and supported both senior team members, and the next generation of Smiths as they took increasing responsibility as non-executive Directors. He took on the honorary role of President, which saw him host key clients from China and the Middle East. But he was more regularly involved in leading tours of the clock works, or responding to archive related queries from horological experts or people simply wanting to know more about the history of their community’s clock. He also much enjoyed his recent detective mission to hunt down ‘lost clocks’. He had researched the company’s late nineteenth century marketing material and ledgers to identify the sites of forgotten installations. Nick took quiet pleasure when the first refurbishment order came through to bring one of his discoveries to life again.

Nick Smith continued to provide both strategic and detailed commercial and engineering advice right up to the end of his life. Just a fortnight before he died he enjoyed a meeting on his hospital ward with one of his Smith of Derby engineering colleagues to work through the fine grained details of the next generation Auto Wind unit.

He firmly believed that a business such as Smith of Derby could only succeed by staying close to the needs of the customer, and constantly improving the company’s products and services. In addition to the sustained recent investments in product development and the search for new markets Nick was particularly supportive of the company’s new training and apprentice programmes. He thought it vital that the business had in recent years invested heavily in a new turret clock training facility – probably the only one of its kind on the planet – and radically improved age balance in the team.

The presence of the apprentices and other younger team members, including graduates in design, electronics and engineering, gave him a sense of optimism. He also felt it vital that the company ensured years of overlap between the new blood and experienced older hands. In particular he was very pleased that in their early years in the business these young people experience every aspect of the company’s work, including sales, traditional clock maintenance and conservation and new installations. This echoes his own experience. He had until recently suggested that he was the last person in the business who had worked in every aspect and department: he was delighted that the current training programme returns to this principle.

A series of companies had joined the group through the course of the last century, including some of the most famous names in turret clock making. Nick had assisted or led on several of these initiatives, which were in all cases sparked by an approach from these companies. Those joining Smith of Derby have included Joyce of Whitchurch, established in the 1690s, Potts of Leeds and Ritchie’s of Edinburgh. Nick strongly approved of a recent redesign of the company’s branding that had returned prominence to all of these names, and underlined the extraordinary histories and broad geographical coverage of the group.

Nick insisted on a very modest account of his own contribution, and is quoted in the Max Craven book as saying ‘as I fade from the scene, better brains, skills and perceptions both within and outside the family will remain to take the Company successfully on through the next generation’. Both colleagues and family strongly contest this account. Craven’s book speaks for many when it concludes by pointing:

‘to the immense importance of Nick Smith’s patient and far seeing approach to his long period as custodian of the business. Nevertheless, if there are any lessons to be drawn from the illustrious history of Smith of Derby, it is that a great deal is gained by people seeing themselves as just one cog in a much larger machine. Respect for the past, enthusiasm for innovation, and a belief in the need to protect and nurture skill are the values that have informed the business from the start’ (Craven, 2011, p. 258)

Craven, Max (2011) The Smiths of Derby: A journey through time, Smith of Derby Group, Derby.