The Derbyshire community is at the heart of everything we do here at Smith of Derby. This may be working with local charities, getting involved in local projects or working with the University. As part of this we recently welcomed 20 members from the Derby committee of Cancer Research UK.

Cancer Research UK is a charity close to the heart of many people. Following the original creation of Imperial Cancer in 1902, following this another cancer group was formed in 1923, known as The British Empire Cancer Campaign before subsequently being renamed as the Cancer Research Campaign in 1970. In 2002 the two organisations merged to form Cancer Research UK as we know it today. 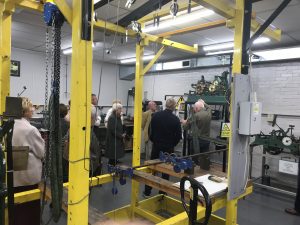 Members of the Cancer Group who visited Smith of Derby during the tour.

Smith of Derby were more than happy to open its doors to 20 members from the Derby branch, who have raised over £1.5m since it began, to help raise funds for the charity who charged members a small fee for the visit.

Patricia Kellogg, committee member of the Derby branch, said “It is thanks to people like Smith’s Clocks for giving up a couple of hours of valuable time, plus the time it takes to organise such an event; which I know takes a fair bit of time.”