Borrowfield Lodge, in Spondon, Derby, formally known as ‘Clock Farm’, has a wealth of history, having been built back in 1840 and listed on the Spondon Historical Society website.  The current owners, Nigel and Dawn Langley, purchased Borrowfield Lodge back on the 15th of December 2017 from a family who had lived there for over 60 years.

When Borrowfield was purchased by the Simms family in 1915, the clock was located on one of the barns to the east of the property. Here it remained until the 1980s, when the mews were built and the clock was removed and stored in the cellar until December 2017.

When the house was sold, the new family were keen to retain the clock as it was a historic part to the house, but the previous owners opted to take the clock with them to their new home in France, as a piece of memorabilia. It was thought that the clock had gone for good.

Fast forward to October 2021, the family were approached by James Wilson of the Spondon Historical Society, who was writing a book about old Spondon Farms and was enquiring if there were any historic elements still in the house that were worth writing about.  Having performed a full refurbishment of the property since moving in, there was no longer any traditional elements current in the house, only stories to tell. The story of the clock became relevant, but its French location proved it to be difficult.

However, the family had remained in contact with the previous owners with intention of maintaining knowledge around the clock. To their surprise, they received information of an offer for the clock to be installed into a local chateau.  Of course, the family suggested they would be interested in purchasing the clock themselves and made a counteroffer.

Once the clock was back in Derby, the family began working out the most appropriate method of restoring the clock back to its original working order. After multiple considerations one being to approach the BBC TV show “The Repair Shop”, the family decided to approach Smith of Derby due to its locality and reputation. They had wondered if Smiths had supplied the clock originally but found from speaking with the team that this was unlikely. Since it was made in the 1840s, several years before the first John Smith’s set up independently as a clockmaker in 1856, a more probable – though difficult to prove hypothesis – is that it was made by John Whitehurst, given its age and style.

Having engaged with Smith of Derby, the family met Sam Welton, who visited them at Borrowfield lodge to view and discuss the renovation opportunities for the clock.  “The great passion and knowledge Sam had for clocks and the Smith business was incredibly infectious”. They were drawn in very quickly to the family approach that Smith of Derby had.  The options were discussed, and the family were provided with a proposal to bring the clock back to its former glory.

After multiple discussions, the family made the decision to proceed with the restoration. On the 2nd of February, the clock was collected for the start of its final journey.

The original dials were sanded down to remove any old paint and rust that had previously built up. Proving them with a clear canvas of the original dial. They were then prepared for painting with an undercoat.

Multiple layers of the black, polymer-based paint were applied to all of the surfaces of the clock. The paint was used for aesthetical purposes but also provided an extra layer of protection to the cast iron dial to maximise its lifespan. After application, and between coats, the paint was left to cure over multiple days to ensure it had hardened and set to maintain durability and provide an even coating.

A size was then applied to specific parts of the surface, providing the desired surface for the gold leaf to be applied successfully and most effectively. This guiding was applied to the minute marks and chapters on the dial, as well as the hour and minute hands. Throughout the process, it proved important to leave the surfaces to cure between each step to provide a suitable surface and maximise durability. The guilding provides the dial with a great finish, that will look especially fantastic when shining in the sun on the front of Borrowfield Lodge.

Traditional Smith of Derby hands were used on the clock, which where similar to the original clocks hands.

On the 3rd of May 2022, the clock returned to Borrowfield Lodge by the Smith of Derby installation team. It was installed on the front of the house for all to see again.

The family had this to say about Smith of Derby…

“Smith of Derby have been incredible during the process and have engaged the family fully in the restoration on many occasions, from workshop tours and meeting some of the team. The family Nigel, Dawn and Pat were invited to watch the first coat of black paint being sprayed on to the clock and were invited to see the gold leaf being applied to the minutes and numerals. Nigel Langley had the opportunity to apply some gold leaf himself.

The whole process at Smith of Derby had been an incredible experience for the Family from their initial engagement and made the story of the clock even more special and exciting for them.  It’s worth pointing out that the family would like  to make a special mention to Sam in sales and operations for his initial engagement and passion, without him we may have well made a different decision,  Phil for sharing with us his many years’ experience of clock making and allowing them to actually get involved with the process, especially the gold leafing,   Beth White for the great pictures she took during the process to share with them, as well as visiting the property to take pictures of the installation of the clock and Mitch and Dan for doing a sterling job installing the clock back to its rightful place. The whole Smith of Derby Team have been incredible and a huge thank you from the Langley family. ”

Borrowfield Lodge is now enjoyed by the current family as well as guests visiting the Derby area who may stay in half the property www.borrowfieldlodge.uk 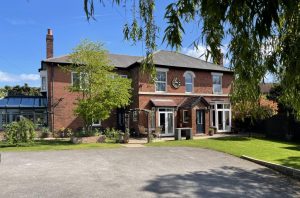 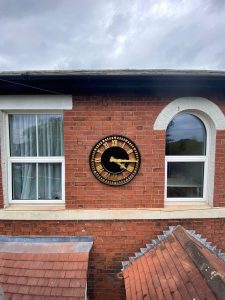