New schools are being built across the City of Glasgow, including in the district of Dalmarnock. At the heart of the campus is a clock tower, with the two clock dials being fabricated and installed by James Ritchie Clockmakers.

Originally approached in 2017 when the project was in an early stage, the James Ritchie team worked alongside the construction contractors to ensure that the client’s desire for a bespoke clock tower was delivered.

Following on-going discussions, it was decided that the design would be simple black hour markings and hands on a white background. Behind the dial was to be LED lights, spread evenly across the 1.5m dials to ensure an even distribution of light. The dials were fabricated from opal acrylic with a vinyl finish, as per the client’s specification, with the accompanying hands being made lazer cut from stainless steel.

Following fabrication in the works the clocks were transported to the Glasgow suburb so the installation process could begin. Using a crane, the team carefully fixed the dials to the clocktower so they would safely adorn the tower for many years to come. 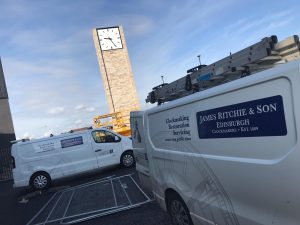 A small detachable panel was fitted at the top of the tower to ensure easy access when servicing the two T300 clock movements and the permanent inverter charger, which ensures that the clock keeps running during power cuts and completes the GMT/BST time changes automatically.